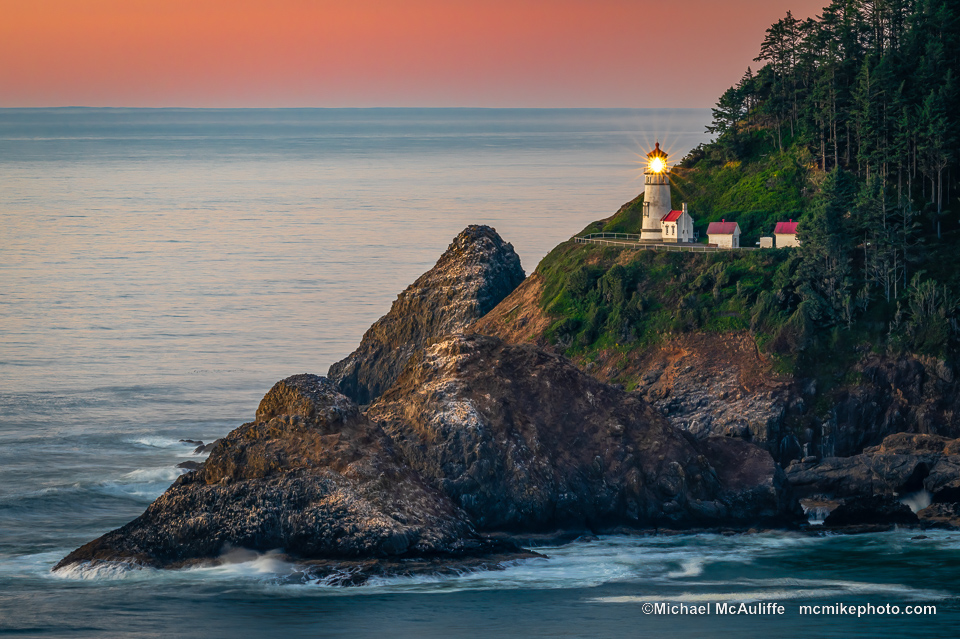 See a LARGER IMAGE in my Oregon Coast gallery.

In September I visited the Oregon coast with my wife to photograph the area for the first time. It won’t be the last. The beaches, bridges, sea stacks, tide pools and sand dunes around Newport and Florence, OR, are amazing subjects but I especially enjoyed the lighthouses. My favorite lighthouse photography location was the Heceta Head Lighthouse at sunset.

The lighthouse is one of the most photographed in the United States and it doesn’t take long to see why. The picturesque light, is located at the Heceta Head State Scenic Viewpoint. It’s perched atop Heceta Head which sits above rocky cliffs and hills that lead down to the Pacific Ocean below. The scenery is breathtaking.  Better yet for a photographer, there are several pullouts on Hwy 101 just south of the lighthouse to setup up your tripod and have a great angle for photography.

I arrived an hour before sunset and photographed through sunset and for a while after the sun set. By using a small aperture and long exposures, I got some shots like the one above. Taking a photo just as the rotating light was shining in my lens created the starburst effect. I used a tripod and cable release to fire off continuous rapid shots to catch the light at just the right time. There was also smoke from a forest fires in the air that added a hazy pinkish glow to the sky.

Of the almost 300 shots I took that evening this was my favorite shot of the Heceta Head Lighthouse at sunset.

Contact me if you are interested in a copy of this photo (or any of my photos) to hang on your wall. All photos are available as matted prints and prints on metal, acrylic or canvas. Here’s an example of a 24″ x 36″ image hanging over the couch.