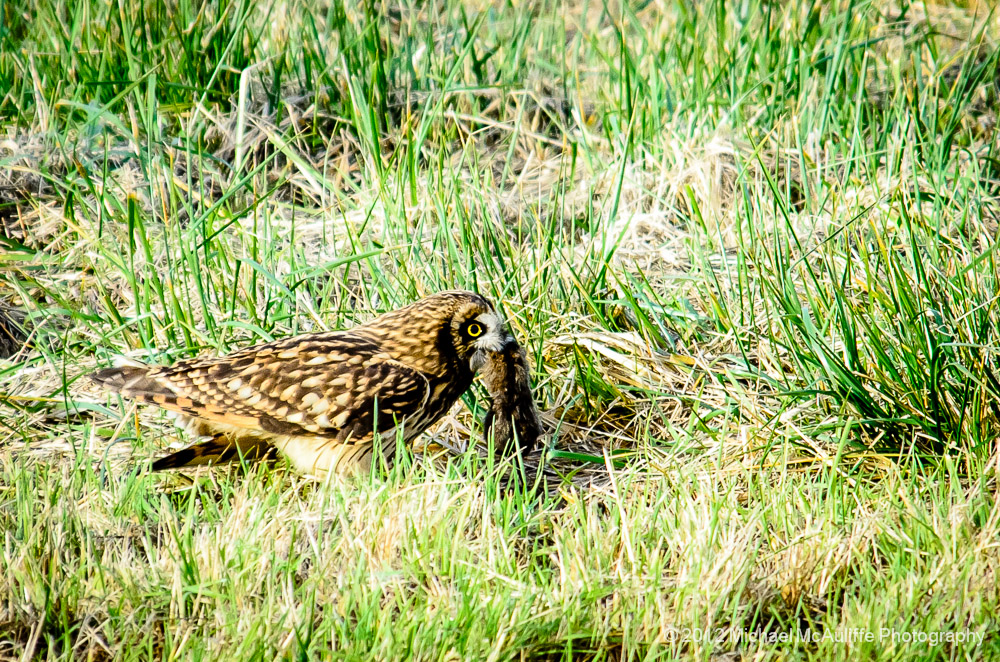 During a trip several weeks ago to Boundary Bay in British Columbia, Canada, I had the opportunity for the first time to photograph Short-eared owls.  There were an amazing number of different types of birds that could be seen while walking along a long dike that provides access to the area around the bay, including several Short-eared owls.

The owls put on quite a show, including the one in the photograph above which was hunting in an open field not far from where we were standing on the dike.  The owl would circle the open field and then once it spotted a potential lunch (some sort of rodents – voles?) would land in the field and grab its unlucky prey.  The owl would then fly past us and over the dike to a thicket on the other side where it would deposit the rodent it had caught – I’m assuming this was in a nest or some other area where it was caching food for a later meal or for some young owls.

The picture below shows the owl on the ground with part of his lunch just after catching it.

Being relatively new to bird photography, one of the challenges that I am encountering and trying to work on is getting sharp pictures of birds in flight.  I am finding that I am definitely going to need to practice smoothly panning the camera along with a flying bird in order to get the bird in good focus and not blurry.  In this case I was hand holding my camera with a Nikon 80-400 mm zoom lens and it was definitely a challenge to keep the lens’s focus point on a flying owl as it rapidly swooped up and down while hunting!

I’ll post some additional photographs of these owls in a future post, including a number of additional flight photos.