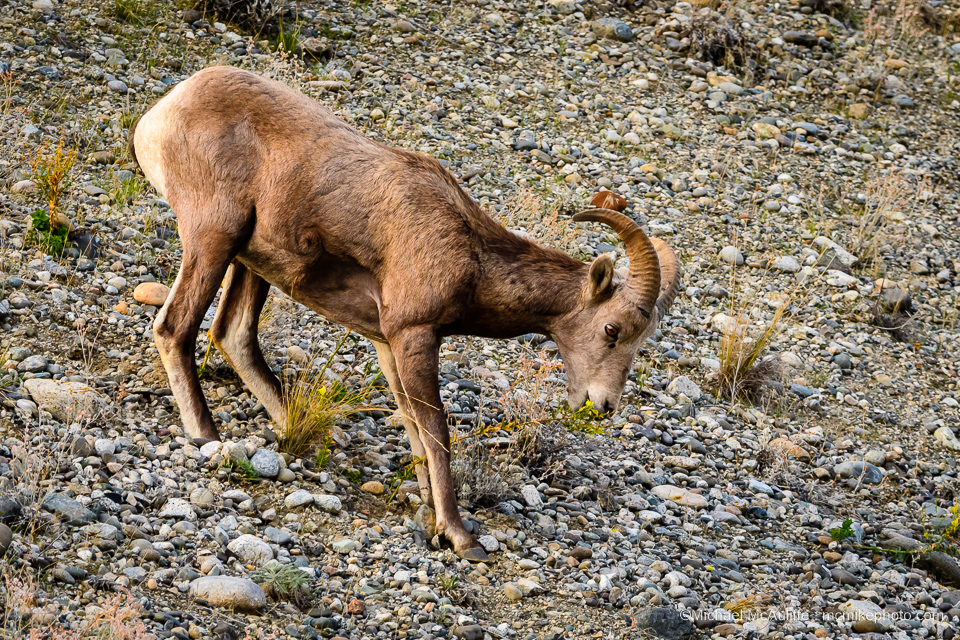 I was out looking for birds to photograph last weekend and instead found Bighorn Sheep near Lake Chelan. I’m not complaining. The sheep were a great surprise and a lot of fun to photograph.

My wife and I were at Chelan Falls Park on the Columbia River looking for birds. As we drove away from the park I spotted Bighorn Sheep across the road in the distance and pulled over to investigate. The sheep noticed us watching them but still headed right at us and the small hill we were parked below. The hill had scrubby flowers and brush growing on it that the sheep wanted for their dinner.

That’s what they did. Approximately 12 Bighorn Sheep came down the hillside, almost all the way to the road. I was able to shoot many photos of the herd from the car, including the shot above of a young sheep eating some flowers on the hillside.

We were definitely lucky to be in the right place at the right time to photograph the sheep herd. I had photographed Bighorns several times previously–once near Wenatchee, WA, and another time in Yellowstone National Park–but on both occasions they were a long ways away. This time they were close and the car made a great photography blind!

This story from the Wenatchee World says there are approximately 200 sheep in the herd in Chelan County. It also notes that Bighorn Sheep had disappeared from Washington State in the 1930s but were reintroduced in 1957.