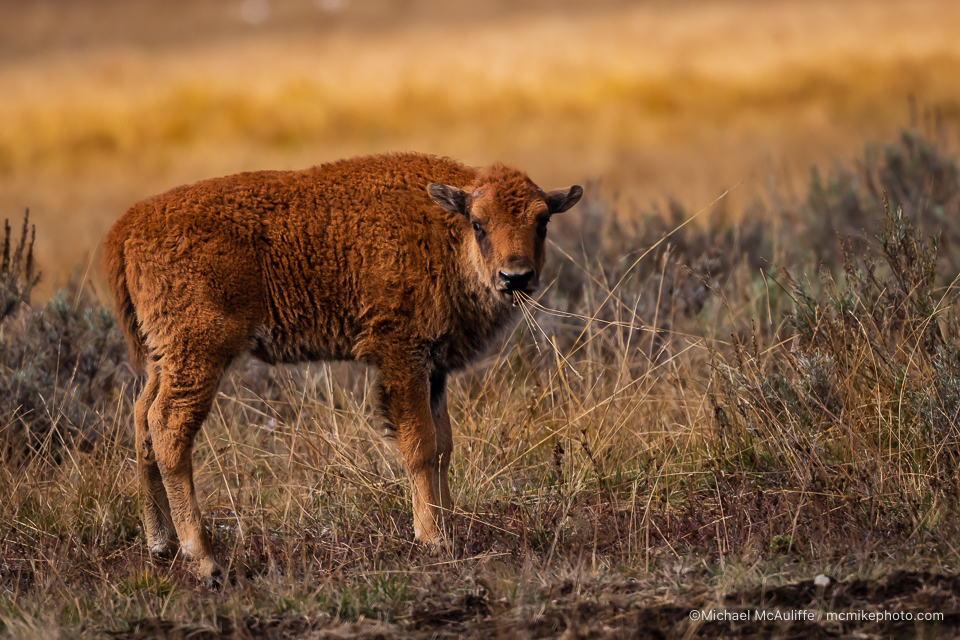 I just returned from Yellowstone National Park. What an amazing place for a wildlife photographer! I had many opportunities to shoot closeups of animals that included bison, elk, and pronghorn. The animals were fairly close and I was able to get lots of closeup shots with my 500mm lens.

Several large herds of at least 250 bison gave me an appreciation of what it must have been like when huge herds of bison covered America’s western frontier. While I enjoyed taking photos of these large herds and closeups of some giant adult bison my favorite bison subject was this calf. The calf was part of a large herd at Nez Perce Ford in the Hayden Valley.

I love how the little calf looks to be sizing me up out of the corner of his eye while munching on some grass. The baby’s reddish-brown coat also tells the story of why young bison are called “red dogs.” This Yellowstone red dog also has little nubs on its head that one day will be large horns.

This little guy must have been a late arrival as almost all of the young bison we saw were already larger adolescents and had transitioned to the typical dark-brown bison color. The photo below shows the same red dog next to a shaggy adult bison and highlights the color change that this little guy will soon undergo. The photo also shows the amazing mid-September fall colors that were making an appearance as temperatures drop at Yellowstone. It even snowed on our first night there!

More shots and stories from Yellowstone to follow in upcoming posts.