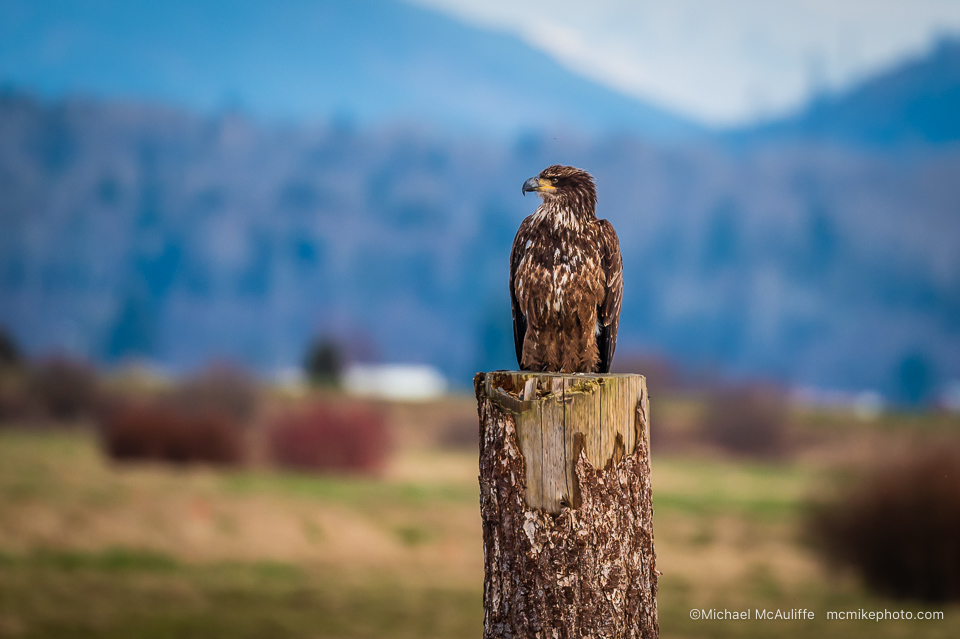 The shot above is a juvenile bald eagle that I photographed in February at the East 90 area of the Samish Flats. The cooperative eagle wasn’t particularly worried about me as I was shooting from a distance with a 500mm lens. This bird was alone but there’s often dozens of eagles in the vicinity, including a nearby tree that I have seen as many as 40 eagles perched in or on the ground in a nearby field.

I photographed the Short-eared Owl in the photo below at the same location earlier in the winter. This has typically been a reliable location to find Short-eared Owls. However this year they were in “short” supply. Several heavy rains early in the winter flooded the fields and the water may have done away with many of the mice and voles that the owls normally dine on there.

Rough-legged Hawks are one of my favorite raptors found reliably in this area. These beautiful hawks often perch on the power lines–not an especially attractive spot for a photo but still a treat to see and photograph these birds.

Northern Harriers like the one below are also frequent visitors. Other raptors you can spot include Red-tailed and Cooper’s Hawks and Kestrels.

If you get a chance don’t pass up a visit to the Samish Flats for some great winter birdwatching or bird photography.