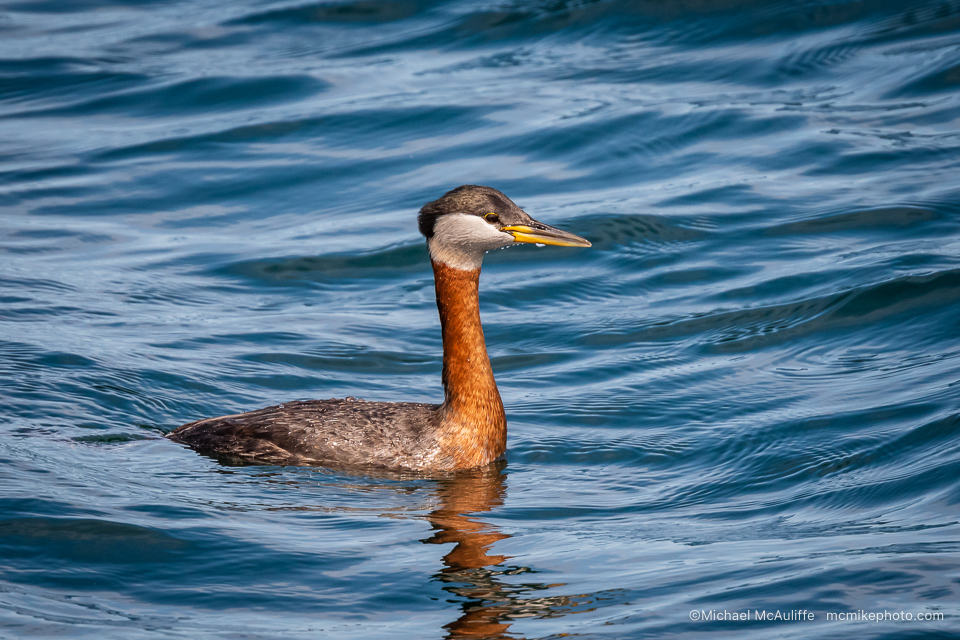 I’ve been photographing an interesting variety of Puget Sound spring grebes over the last week. Here’s a selection of photos taken from the fishing pier on the Edmonds, WA, waterfront. There’s a short time window in the spring to catch these birds in full breeding plumage. I was glad to get some photographs before they head north or east to breed.

The bird in the photo above is a Red-Necked Grebe. These grebes are about the same size as many ducks but have a longer neck and heavily pointed bill. They dive under the water for fish and crustaceans that are their primary food sources. They are also a huge kick to watch as they move from one place to another on the water without flying. The shot below is a Red-necked Grebe “walking” or rather “running” on the water to move to an area where there were more fish.

Horned Grebes are a smaller type of grebe and are stunning in their breeding colors/plumage. The photo below is of a group of Horned Grebes that have been on the waterfront for about a week. During the fall and winter months I can normally find a few Horned Grebes in the area. Lately there’s been a larger group of 12 or more swimming together. This has made for some great group photos. Interesting Fact–a group of grebes is called a “water dance” of grebes. This name refers to their elaborate courtship displays or “dances.”

Below is a shot of one Horned Grebe swimming right below the fishing pier. This isn’t the greatest angle–it would be much better to be photographing them from the bird’s eye level. Unfortunately I didn’t have that option so settled for this shot.

A better shot of a Horned Grebe in breeding plumage taken from eye level a few years ago can be found in a blog post from last year.

A third type of Grebe can frequently be found on Puget Sound. Here’s a recent shot of a Pied-billed Grebe also taken from the Edmonds fishing pier a few weeks ago. Pied-billed Grebes are often found on fresh water ponds and marshes but in the winter also hang out on larger bodies of water like Puget Sound.

Stay tuned for my next post which will featured Marbled Murrelets and Rhinoceros Auklets.

Bird of the Week: Black Turnstone

The Gull and the Starfish